Take a look at the Multigrain Reconfiguration demo

Currently, the hardware adaptivity provided in CERBERO is based on the multi-grain reconfiguration, given by the combination of ARTICo3 framework and MDC tool. This integration delivers the best of both CGR and DPR approaches into an adaptive multi-grain heterogenous reconfigurable fabric, which can meet the changing of functional, non-functional and repair-oriented requirements of CPS designs. The CERBERO approach is not simply meant to provide a novel architecture, rather it aims at offering support the design of the different parts of the system, their deployment and runtime management.

The hardware generation flow starts from high-level dataflow descriptions of the configurations/behaviors to be implemented in the configurable logic, and the integrated toolchain derives the corresponding CGR HDL computational kernel, properly wrapping it with the glue logic necessary to serve as an ARTICo3 DPR reconfigurable partition. Both reconfiguration mechanisms are transparently managed by the user code running in a host processor. With respect to the standalone MDC and ARTICo3 flows, an adaptation step (Kernel Adapter) is needed to make the MDC-generated kernels compliant with kernels expected by ARTICo3 Wrapper Automation step.

The whole MDC-ARTICo3 design flow is as follows. 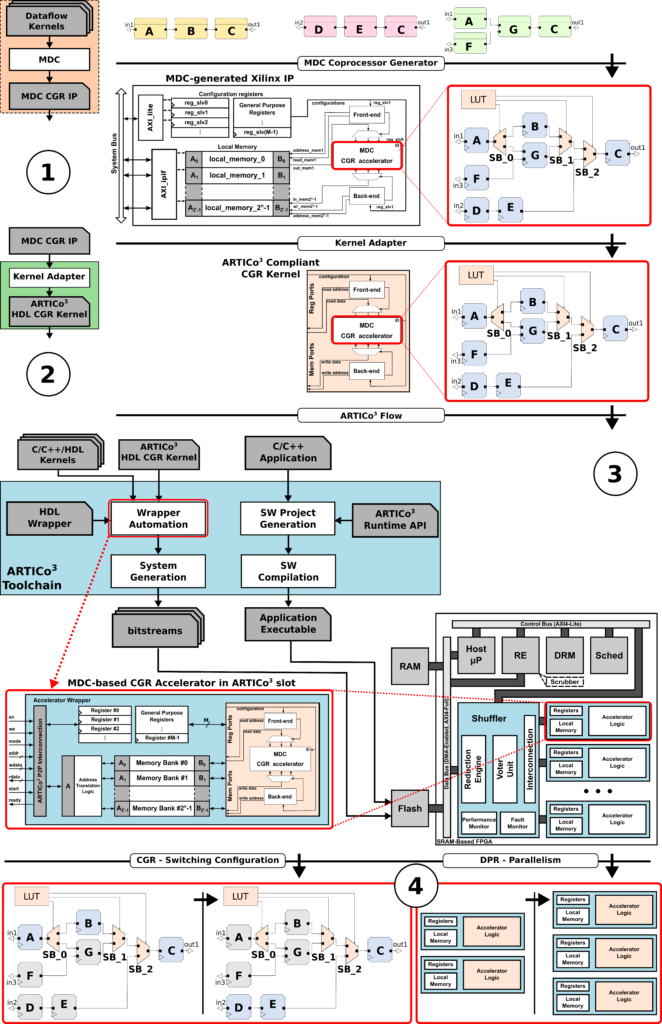 👨‍🎓🌞🏊‍♀️ 👩‍🎓I am glad to announce that the #CPSschool on "designing #CPS from concept to implementatin" is back! Apply online by June 22: cpsschool.eu/application/ Meet distinguished lecturers and enjoy Sardinia in Sept. It will be a unique experience: youtu.be/IQX75Jemx_0

#memories from the #CPSschool. Due to #COVIDー19 we had to skip the #2020edition, but we are already planning next 2021 one. Meet us next Sept in the south coast of Sardinia in cooperation with @FitOptiVis and @ALOHA_H2020. @SardegnaRs @IdeaLabUniss @CPSschool20 @FitOptiVis pic.twitter.com/wCZ3mSksjh

Very proud of Daniel Madroñal that is discussing a #PhD #thesis on #energy consumption reduction. One of the #CERBERO tooling results, #papify, has been presented and runtime loop demonstrated to be effective! Great Job, Dani! Impressive impact! @CITSEM @La_UPM @dmadro4 #H2020 twitter.com/Tiziana_Fanni/… pic.twitter.com/FlkzCetXTs

Debriefing after the #review! #ThankYou all guys, despite we #StayAtHome we are celebrating this successful #review! pic.twitter.com/xNpbJqM548

Check what we can do! #sensor #fusion capabilities of #marine #robots improved thanks to #CERBERO technologies. twitter.com/AmbieSense/sta…